M.M. Antokolsky was attracted by the dramatic epoch of the 16th century. In the artist’s mind it was connected with the image of Ivan the Terrible. While working on this sculpture, the artist constantly read historical literature and carefully studied documentation from the era, he made special trips to Moscow to "soak up the ancient air of the first capital". He went to the Armoury in the Moscow Kremlin to study and copy the reliefs of Ivan the Terrible’s original throne, he even borrowed the Tsar’s clothing from the costume collection at the Bolshoi Theatre. However, he could only recreate the character’s appearance, personality and his psychological condition in his imagination. This sculpture has none of the familiar elements usually found in a representative portrait: the pose, the model’s grandeur and official quality in the event. Ivan the Terrible is represented absorbed in dark thoughts. Every detail takes us into the confused inner world of the Tsar: his luxurious throne, a symbol of state splendour, the list of the dead and sick to be prayed for, the image of painful repentance, his monk’s robe, a sign of humility, concealing uncontrolled violent passions. The ambiguity in the Tsar’s image becomes evident, when examined from different view points. From the right, a king is visible in a condition of profound spiritual and physical exhaustion: his elbow listlessly falls off the throne arm, his hand deprived of will clasps the rosary. From the left, the image’s supreme power is visible. This is contained in the Tsar’s eagle profile, his fingers contorted like a predator’s claws grasping the throne’s arm; the clear vertical rhythm in the folds of his robes emphasise the energy and the Tsar’s formidable will. The tormenting ambiguity and the mental illness that is devastating this huge character creates a tragic and horrific image of the despot. A sensation of concealed, restrained motion is enhanced by the uneven rhythm of light as it glides along the surface and falls into the deep folds. Like all Antokolsky’s early work, the sculpture reveals the beginning of a plot, however, there is an obvious desire to overcome superfluous details and illustration to achieve greater psychological expression and plastic conceptualization in the image 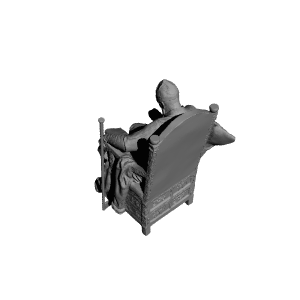 ×
3 collections where you can find Ivan the Terrible von Scan The World
×
Andrew Wu
@andrewwu
2
Printed on: Other
Material: PLA
Posted at: 25th October 2020