The Blackbird come from one of the most secretly project developed by Lockheed Skunk Works team; evolution of original project called A-12, it enetred service in 1968 and served till 1998 with USAF and 1999 with NASA.
This magnificent bird resemble much more a spacecraft than an airplane and the two men of the crew wear some kind of space suit ; actually if it could fly a little more higher we shouldn't say "fly" but "orbit".
Kelly Johnson creature was able to fly at an altitude of 26 km at 3540 km/h : too high and too fast to be shoot down by defence systems of its era.
Every aspect of this aircraft was the most advanced, from engines to electronic equipments, stealth properties, special fuels, anti radiation paints and Hi-tech materials; of course all of this have an high production and maintenance cost so , once other more affordable reconnaissance technologies became available, the Blackbird has been retired from service. Last flying planes were used for some time by NASA as platform for experiments.

Model scale 1:100 printed at 1:285 with 0.2mm nozzle (but still sliceable with 0.4mm nozzle and 1:300 scale) and 0.12 mm layers ... PLA black mandatory.
Print test made with a Ender3 as shown in the image taken from PrusaSlicer 2. I splitted in two the model in order to preserve details and eliminate the needs of supports. 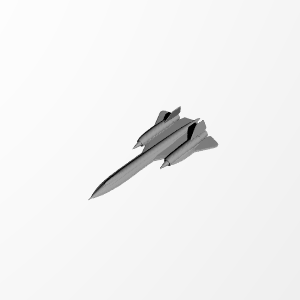 One of my first prints. PLA with Carbon Fiber. Excellent results and finishing.