3D
360°
Scan The World
1,419 views 71 downloads
Community Prints Add your picture
Be the first to share a picture of this printed object
0 comments

The Oro association is responsible for enforcing fines and penalties and carrying out punishments. The Oro uses masks of this type during annual festivals. Maskers are also involved in burial procedures for everyone, no matter the status of the deceased. The many figures on top of the mask, including a prisoner, a preacher, a musician and a soldier indicate that Oro activities involve the whole community

This carving includes several elements that were brought back to the area by former slaves from Brazil. These include the double scroll form just above the main face, the floral cluster in back, and what appears to be a garland of leaves placed around the main head. These Brazilian elements became common in architecture and other art forms after being introduced in the second half of the 19th century. 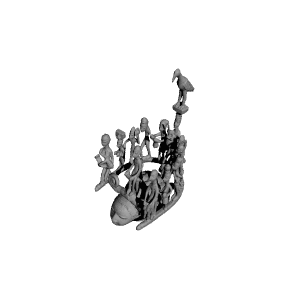