3D
Scan The World
3,793 views 322 downloads
3 collections
Community Prints Add your picture
Be the first to share a picture of this printed object
0 comments

Lead was a favoured material for garden sculpture, as it was relatively inexpensive (this example cost £20), and could be cast in a mould for mass production. Often lead groups were reproductions of famous classical or Renaissance marble groups, but this is an 18th-century composition. Many sculptors reproduced famous classical or Renaissance marble groups, such as the Borghese Gladiator, or the sculpture of Giambologna. Frequently Netherlandish artists, such as Carpenter (and before him John Nost, a native of the Netherlands) were responsible for the casting, as they had developed the necessary skills in Europe.

This piece shows the mythical hero Meleager, who killed the savage Calydonian boar. He is represented here with his hunting dog. The figure probably surmounted a gate-pier, and is one of a number of garden sculptures in lead made in the first half of the 18th century.

The sculptor Andrew Carpenter came originally from the Netherlands or France and was first recorded in London in 1702. He worked in marble but produced a great number of garden sculptures in lead, including work for Wrest Park, Bedfordshire, and Canons, Middlesex, and had worked with John Nost the Elder as his principal assistant. He had set up a workshop specialising in lead sculptures near Hyde Park by 1714. 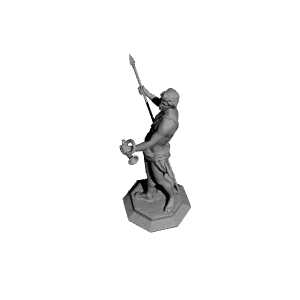 ×
3 collections where you can find Meleager von vam