Shown emerging from the four-lobed symbol, which represents the door to the Underworld, is the dreaded Coma Zotz. This bat is associated with the Underworld, death, and sacrifice. There is a death sign shown on his chest.

This Montini brick is joined with a Mayan carving from the Yucatán Peninsula of Mexico.

Just like the vintage original Montini parts, this is compatible with classic Lego full height bricks.

Montini building bricks were produced from 1961 to 1969 in the Netherlands. They were originally made from soft, pliable polypropylene. The diagonal fins bend slightly around the pips of the other block.

I would love to see your make! 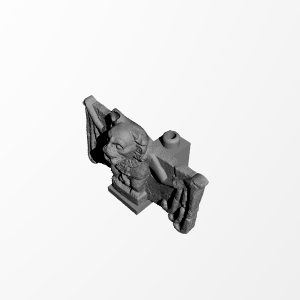