Perseus With The Head of Medusa

Perseus With The Head of Medusa

This sculpure is a cast of a bronze sculpture of the same name. The original sculpture, cast by Benvenuto Cellini in 1545, stands on permanent display in the Loggia dei Lanzi of the Piazza della Signoria in Florence, Italy. The second Florentine duke, Duke Cosimo I de’ Medici, commissioned the work with specific political connections to the other sculptural works in the piazza. When the piece was revealed to the public on 27 April 1554, Michelangelo’s David, Bandinelli’s Hercules and Cacus, and Donatello’s Judith and Holofernes were already erected in the piazza.

This cast has slight differences in form; executed by Hubert Gerhard (about 1550-1623) for the Grottenhof in the Residenz in Munich. There are slight variations in beheaded Medusa and the base is completely different to the original serving to be just a stone that Perseus stands on in contrapposto.

The subject matter of the work is the mythological story of Perseus beheading Medusa, a hideous woman-faced Gorgon whose hair was turned to snakes and anyone that looked at her was turned to stone. Perseus stands naked except for a sash and winged sandals, triumphant on top of the body of Medusa with her snakey head in his raised hand. The body of Medusa spews blood from her severed neck. The bronze sculpture and Medusa’s head turns men to stone and is appropriately surrounded by three huge marble statues of men: Hercules, David and later Neptune. Cellini breathed new life into the piazza visitor through his new use of bronze in Perseus and the head of Medusa and the motifs he used to respond to the previous sculpture in the piazza.

The great mannerist sculptor Hubert Gerhard (c.1550- c.1623) cast the elaborate Perseus fountain in bronze for the Grotto Courtyard (Grottenhof) at the Residenz in Munich in about 1590. The courtyard was part of a great building programme at the Residenz for the Duke of Bavaria, William V. Gerhard was originally from the Netherlands, but trained in Italy under Giambologna, and subsequently worked in Prague, Munich and elsewhere. His fluid yet monumental style was especially attuned for patrons at court. Here we see the mythological hero Perseus holding aloft the severed head of the gorgon Medusa. Gerhard must have been inspired by the famous statue of the same subject by Benvenuto Cellini in Florence, also cast in bronze, dating from 1545. The plaster reproduction of the fountain at the V&A was cast by S.N. Mark of Munich in about 1867. 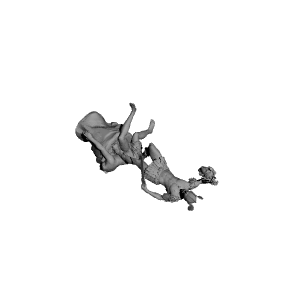