Relief of the Crucifixion of Jesus (no base)

3D
Scan The World
3,831 views 558 downloads
3 collections
Community Prints Add your picture
Be the first to share a picture of this printed object
0 comments

Relief of the Crucifixion of Jesus (no base)

Jesus, the Christ, was arrested, tried, and sentenced by Pontius Pilate to be scourged, and finally crucified by the Romans. Jesus was stripped of his clothing and offered wine mixed with gall to drink, before being crucified. He was then hung between two convicted thieves and according to Mark's Gospel, died some six hours later. During this time, the soldiers affixed a sign to the top of the cross stating "Jesus of Nazareth, King of the Jews" in three languages. They then divided his garments among them, but cast lots for his seamless robe. After Jesus' death they pierced his side with a spear to be certain that he had died.

This relief is displayed in the convent of Saint Agnes, situated on the right bank of Vltava, in Prague Old Town area called "Na Františku". The monastery of Poor Clares of the Order of Saint Clare and Franciscans was founded in 1231 by Agnes of Bohemia, who also became the abbess of the convent.

Agnes of Bohemia, also known as Agnes of Prague, was a medieval Bohemian princess who opted for a life of charity, mortification of the flesh and piety over a life of luxury and comfort. Although she was venerated soon after her death, Agnes was not beatified or canonized for over 700 years.

You can download this object with a base here. 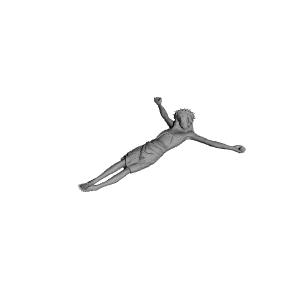