3D
Scan The World
1,463 views 50 downloads
1 collection
Community Prints Add your picture
Be the first to share a picture of this printed object
0 comments

Sarcophagus with Ichthyocentaurs and Nereids made during the first half of the 3rd century AD and today displayed at the Museo Archeologico Nazionale di Napoli.

In late poetical Greek mythology, ichthyocentaurs (sea-centaurs), were a race of centaurine sea-gods with the upper body of a human, the lower front of a horse, the tail of a fish, and lobster-claw horns on their heads. The best-known members of this race were Aphros and Bythos, two half-brothers of the wise centaur Chiron and the sons of the Titan Cronus and Nymph Philyra.

For their part, the Nereids are sea nymphs (female spirits of sea waters), the 50 daughters of Nereus and Doris, sisters to Nerites. They often accompany Poseidon, the god of the sea, and can be friendly and helpful to sailors, like the Argonauts in their search for the Golden Fleece. 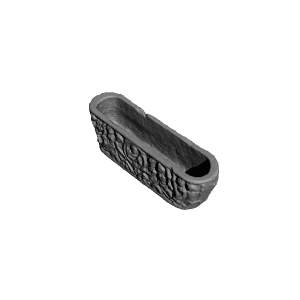