3D
Scan The World
4,858 views 578 downloads
3 collections Add to collection
23 0
Community Prints Add your picture
Be the first to share a picture of this printed object
0 comments

St George on horseback slays the dragon with his lance on a rocky promontory. A bronze cast of a life size equestrian figure intended for a public space was unusual in the 14th century, and unique to Bohemia. The group originally surmounted a fountain in the courtyard of the royal palace of Prague. It was probably cast by the Hungarian artists Martin and George of Kolozsvás/Kluj, perhaps with the assistance of the German/Czech architect Peter Parléř (1330-1399). This plaster cast was acquired in 1864, a few years before the Cast Courts were opened, and demonstrates the Museum's desire to display copies of great monumental sculpture from across Europe. 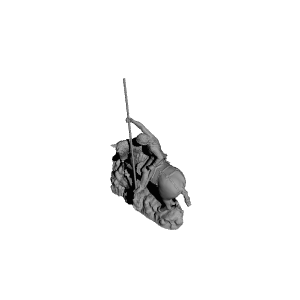