3D
Scan The World
3,087 views 337 downloads
Community Prints Add your picture
Be the first to share a picture of this printed object
0 comments

The sculpture, dated to the 2nd century A.D., is thought to be based on a Greek original of the late 5th century B.C. given the characteristics of the clothing. The prototype was very popular in ancient Rome, where it was copied, with numerous variants, to represent different goddesses (Aphrodite, Hera, Hygieia, Athena, Tyche) and for portait statues. The gesture with the outstretched arm – added during restoration –, as if to display a product of the earth, suggests that this is a statue of Demeter, the goddess who protected crops. 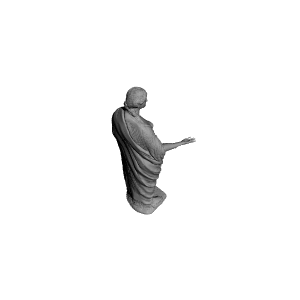