3D
Scan The World
3,581 views 396 downloads
5 collections
Community Prints Add your picture
Be the first to share a picture of this printed object
0 comments

The Abduction of Polyxena (or The Rape of Polyxena) is a marble statue located in the Loggia dei Lanzi, the open-air museum in Florence, Italy's Piazza della Signoria.

The work was sculpted in 1868 by the Italian sculptor Pio Fedi (1815-1892) who, albeit working chiefly in the Romantic style, was placed alongside several sculptures from the Renaissance.

The Abduction of Polyxena embodies Hellenistic, Renaissance, Baroque and Neoclassical mannerisms regarding its style and theme. Fedi intricately blended multiple styles and stories in order to contruct the complicated work. The most prominent literary sources of the Greek legent concerning Polyxena are Ovid's Metamorphoses, Euripides' Hecuba and Bocaccio's Famous Women.

Polyxena was the daughter of King Priam and Queen Hecuba of Troy. Achilles fell in love and wished to marry her. One story relates that she helped set up his murder and another tells that he died in battle.

Achilles ghost demanded Polyxena's sacrifice on his tomb. This sculpture shows the Greeks seizing her.
The modern group, with its four large figures, was produced out of a single block of marble, and, until the work was executed, the sculptor was exceedingly poor and comparatively unknown, but this achievement lifted him at once out of poverty and obscurity. This remarkable work was purchased by the city of Florence on condition that the artist would not reproduce the subject, and it was placed here in the Loggia with the works of some of the greatest of Italian sculptors. It represents a mythological subject, the forcible abduction of Polyxena by Achilles.
The warrior, whose form is characterized by great strength and beauty, encircles the form of the maiden with his left arm, while his right is uplifted and in its hand is a sword with which he is about to strike down the mother, Hecuba, who, kneeling at his feet, implores his mercy while she clings piteously to her child and the betrayer. The entire group is exceedingly strong, not unworthy of the immortal company by which it is surrounded, and the powerful impression which it makes upon all beholders is intensified when one recalls the fact that, on the promontory of Sigeum - so the legend goes - where, after the fall of Troy, were buried the ashes of the hero-leader Achilles, and those of his friend Patroclus, Polyxena was offered as a propitiatory sacrifice. The group is instinct with vitality, passion and action, and seems more real and lifelike the oftener you behold it. 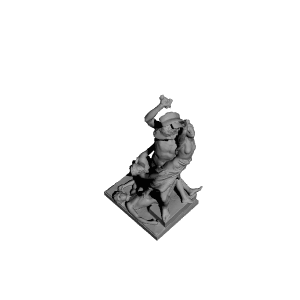