The adoration of the Empty Throne

The adoration of the Empty Throne

Before the human image of the Buddha developed in the 1st century AD, he was represented by symbols, such as this empty throne. The practice continued for two more centuries while human forms were also created. This image plays on the idea of the Buddha as the spiritual equivalent of a king who rules the whole world, or 'chakravartin'. The disc resting on the seat probably represents the sun, a symbol of the Buddha's radiance.

This red sandstone carving probably once formed part of a temple or shrine. It depicts the adoration of the empty throne, with a Buddhist emblem on it. The emblem can be variously interpreted as a throne cushion, a discarded turban headdress or a 'dharmachakra' ('wheel of law') symbol.

Early Buddhist artists were reluctant to represent the Buddha in human form. They preferred to indicate his presence symbolically. This relief indicates the Buddha's presence through an empty throne, attended by two attendants bearing fly-whisks, emblems of a world sovereign (‘cakravartin’), and flanked by winged-lion capitals. 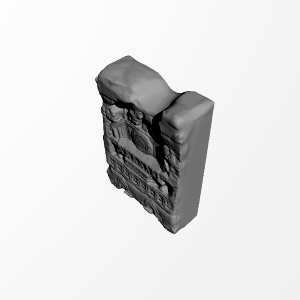