"Brother Halden started out life as a street urchin, and kept poor company into his teens where he worked as a hired thug for some of the more undesirable merchants and gang bosses and guilds. On one of his “shake down” jobs, he was acting on behalf of his employer to retrieve some overdue rent from a local sculptor. When the coin didn’t appear and the situation got a little heated, a loud bang was heard from a back room, and a large clay golem came bursting through the wall and wiped out his 2 associates. Just as the golem was about to strike Halden, The god of clay made a brief appearance and solidified the Golem and caused it to explode like an over baked vase so as to prevent its further use as a weapon (Golem’s are supposed to be used as tools and are prohibited from harming sentient beings). At that moment, Halden became aware that the gods were real beings and not just children’s stories as he had previously believed. he became fascinated with the gods, learning all about them and embarking on a quest for knowledge. He now has an unshakable faith in the gods and is a crusading missionary whose mission is to help others see the error of their ways, offering them a choice between changing their ways or being the recipient of a solid smiting on behalf of his favourite mace!" 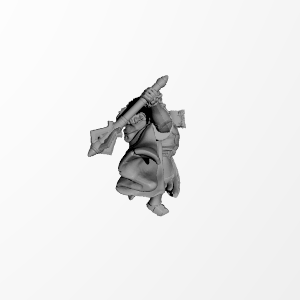