The Old Man of La Chapelle

3D
Scan The World
6,617 views 972 downloads
7 collections
Community Prints Add your picture
Be the first to share a picture of this printed object
1 comments

The Old Man of La Chapelle

La Chapelle-aux-Saints (Fossil name) or The Old Man of La Chapelle' is a 60,000 year old skull of a Neanderthal (Homo neanderthalensis).

Discovered in 1908, the skeleton of "the old man of La Chapelle" was the first relatively complete skeleton of a Neanderthal individual that scientists had ever found. Buried in the limestone bedrock of a small cave near La Chapelle-aux-Saints, France, this skeleton includes the skull, jaw, most of the vertebrae, several ribs, most of the long bones of his arms and legs, plus some of the smaller bones of his hands and feet. The well-preserved skull shows the low, receding forehead, protruding midface, and heavy browridges typical of Homo neanderthalensis.

Scientists estimate he was quite old by the time he died, as bone had re-grown along the gums where he had lost several teeth, perhaps decades before. In fact, he lacked so many teeth that it’s possible he needed his food ground down before he was able to eat it. Other Neanderthals in his social group may have supported him in his final years.

The original reconstruction of the ‘Old Man of La Chapelle’ by scientist Pierre Marcellin Boule led to the reason why popular culture stereotyped Neanderthals as dim-witted brutes for so many years. In 1911, Boule reconstructed this skeleton with a severely curved spine indicative of a stooped, slouching stance with bent knees, forward flexed hips, and the head jutted forward. He thought the low vaulted cranium and the large brow ridge, somewhat reminiscent of that seen in large apes such as gorillas, indicated a generally primitive early human and a lack of intelligence. However, additional discoveries of Neanderthal skeletons coupled with a re-examination of the Old Man’s skeleton in the 1950’s showed that many of the features thought to be unique in Neanderthals fall within the range of modern human variation, and that the Old Man suffered from “gross deforming osteoarthritis”. Thus, the slouching posture of the original reconstruction may have been based on an unfortunate individual with a deforming disability.

But this isn't quite the whole story. A more recent evaluation of the entire skeleton by scientist Erik Trinkaus has shown that, while the Old Man of La Chapelle did suffer from a degenerative joint disease, the deformation caused by this should not have affected Boule's original reconstruction of the individual’s posture. It appears that Boule's own preconceptions about early humans, and his rejection of the hypothesis that Neanderthals were the ancestors of modern humans, led him to reconstruct a stooped, brutish creature, effectively placing Neanderthals on a side branch of the human evolutionary tree. (Boule even gave his reconstruction an opposable big toe like the great apes, but there was no bone deformity that should or could have led to this interpretation.) 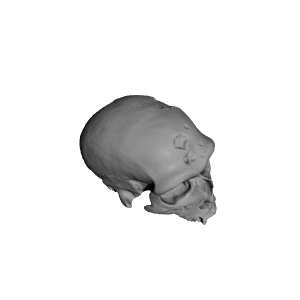