The Soldier of Marathon Announces Victory at the Louvre, Paris

The Soldier of Marathon Announces Victory at the Louvre, Paris

After the Greeks' first victory over the Persians at Marathon, a soldier ran more than forty kilometers to Athens to announce the news. Having delivered his message, he died of exhaustion. Cortot chose to depict the moment when the weary soldier collapses. In a final burst of pride, he raises his chest and brandishes the palm of victory aloft.

At Marathon in 490 BC the Greeks first defeated the Persians. The Persian army of King Darius I had disembarked near Marathon, but judging the place unfavorable to military maneuvers, began to re-embark. Miltiades, leader of the outnumbered Greek troops, decided it was the right moment to attack the Persian army. Legend claims that a soldier ran all the way to Athens to announce the Greek victory, then collapsed and died of exhaustion. This has since given birth to the famous marathon race.

The Soldier of Marathon was the epitome of the virtuous hero who sacrificed himself for the glory of his homeland, a theme that had been very fashionable in France since the late 18th century. Cortot presented a plaster model of the work at the Salon of 1822. In 1831 Louis-Philippe, who had recently acceded to the throne, commissioned the marble. It was part of a series of commissions illustrating the glories of antiquity, including numerous heroes celebrated for their courage, their devotion to patriotic or civic duty, and their stoicism, including Philopoemen by David d'Angers and Cato of Utica by Jean-Baptiste Roman, both in the Louvre. Shown at the Salon of 1834, Cortot's marble was placed in the Tuileries Gardens as a pendant to James Pradier's Prometheus (Louvre).

This athletic male nude draws on the conventional representation of a hero in antique statuary. It provided the sculptor with an occasion for executing a superb academic figure. The pose recalls Johan Tobias Sergel's study for the Dying Othryades, in which the reclining soldier raises himself up to inscribe the victory on his shield. The Swedish sculptor had presented this work in 1779 as his admission piece to the Royal Academy of Painting and Sculpture, Paris.
The head, thrown back, evokes the image of the Dying Alexander (Uffizi, Florence), an antique head whose cast every sculpture workshop possessed. The finely modeled face remains impassive; the locks of hair are carved very consistently. The soldier shows no trace of fatigue, pain, or overly vivid emotion. Trained in the classical tradition, Cortot sought to represent the ideal character even when the subject demanded a certain violence of expression. James Pradier borrowed the theme in 1852 for his Soldier of Marathon (private collection). 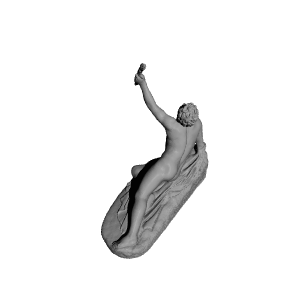 ×
2 collections where you can find The Soldier of Marathon Announces Victory at the Louvre, Paris von Scan The World
×
Andrew Wu
@andrewwu
2
Printed on: Other
Material: PLA
Posted at: 08th October 2017

Going to be used in an interior decoration project. Printed at 0.1mm on the Snapmaker in marble PLA.