3D
Scan The World
2,077 views 149 downloads
1 collection
Community Prints Add your picture
Be the first to share a picture of this printed object
0 comments

This mask was found near the Dipylon Gate in Athens. The facial features are exaggerated. The mask has been identified as the type of the 'ruler slave', the first slave, of New Comedy. The New Comedy is the third and last period of Ancient Greek Comedy: it is comparable to situation comedy and comedy of manners. For the first time, love became a principal element in the drama. The New Comedy depicted Athenian society and the social morality of the period, presenting it in attractive colors but making no attempt to criticize or improve it.

Following the cathartic objective of Greek theatre, masks such as this one had to bear exaggerated features to represent the extremes in which the citizens should not fall. 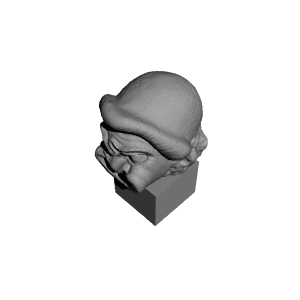