3D
Scan The World
2,585 views 156 downloads
1 collection
Community Prints Add your picture
Be the first to share a picture of this printed object
0 comments

Tyche, 2nd century, marble, Musee du Cinquantenaire (Brussels, Belgium). Made with Memento Beta. Sculpture representing a ideal woman (Tyche or Fortuna in latin), goddess of destiny, misfortune, luck, and wealth, luck, power, and success of inhabitant or empire. In the southern part of the Roman Empire, Tyche was protector of a city. The crown on top of diadem shown this figure represent a specific city. The goddess wears a chiton (long tunic) and a himation (cloak). On the right hand she has a cornucopia where fruits poor out and on the left hand a rudder (to lead destiny) on top of a globe (symbol of universe). 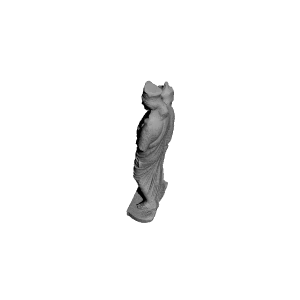 ×
1 collections where you can find Tyche von geoffrey.marchal