The front of this altar shows the god Mars, ancestor of Romulus and of all the Roman People, alongside the goddess Venus, mother of Aeneas and of the gens Julia. On the back is a scene with the she-wolf nursing Romulus and Remus; a personification of the river Tiber; and two fleeing shepherds, probably Faustulus, adoptive father of the twins, and his brother Faustinus. On the left is the personification of the Palatine, also dressed as a shepherd. The eagle of Zeus, symbolically govering hovering over the sacred grotto of the Lupercal, indicates that events are unfolding under divine auspices. The two sides of the altar are carved with cupids, Venus's companions, playing with the chariot and weapons of Mars. The inscriptions indicate that the altar was dedicated to Mars and Venus, but that it was later used as a pedestal for a bronze statue of the god Silvanus. The consuls mentioned in the text securely date the inscription to October 1st, 124 AD . The carvings, cornice and mouldings are part of an iconographic repertoire that dates between the reign of Trajan (98-117 AD) and the early Hadrianic period (117-132 AD). The inscriptions, added only a few years later, confirm this dating. In this time period the Emperor Hadrian promoted renewed interest in themes related to the origins of Rome. 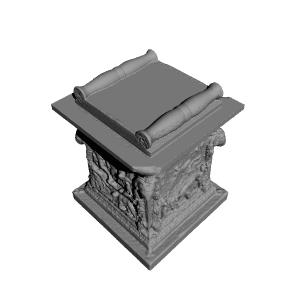