Antisthenes died in 370 BC. This image appears to have been created - perhaps on the basis of an earlier portrait - in Pergamon (Pergamum), a Greek city of Asia Minor, in the late third or early second century BC. The wild hair, ragged beard, arched eyebrows, furrowed brow, prominent nose and hooded deep-set eyes are all features of a generalized philosopher type developed for the library of Pergamon, capital of one of the great Hellenistic dynasties. Features indicative of a specific individual were overlaid on this general type. The Pergamon Library portraits were much copied in the Roman period. This one was found with copies of others near the Via Appia outside Rome. 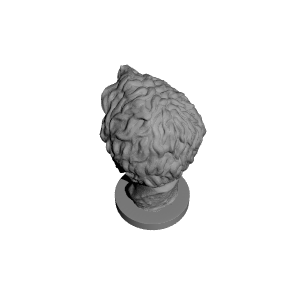