Arthas Menethil, Crown Prince of Lordaeron and Knight of the Silver Hand, was the son of King Theneras Menethil 2 and heir to the throne. He was trained as a paladin by Uther the Lightbringer, and had a romantic relationship with the kind sorceress Jaina Proudmoore.

Despite his promising beginnings, Arthas became one of the most powerful and evil beings Azeroth would ever know. Taking up the cursed runeblade Frostmourne, he became a death night, led the Scourge in destroying Lordaeron, and merged with the Lich King. Ruling as the dominant personality of the Lich King for years afterwards, Arthas was defeated in combat by adventures of the Alliance and the Horde. Cradled by the spirit of his father, King Terenas, Arthas Menethil died, leaving the mantle of the Lich King to be taken by a noble soul who would contain the power of the Scourge.

My work in Zbrush

For this sculpt I started from a dynamesh sphere and I tryed to follow few reference images to adapt the design during the primary and secondary forms.

When I had almost all the base mesh ready I used brushes like:

I really enjoyed to use the curve tube brush that allowed me to complete the helmet, having care modifying the preference under the Stroke-curve modifiers menu.

After the detail step I also adapt the model to be support free and easily printable in one part only. 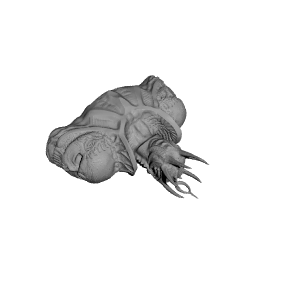