The Borghese Gladiator/Warrior is a reduced plaster cast of a copy of the antique marble which was added to the Borghese collection after it was found in the early seventeenth century.

Since its discovery, the Borghese Gladiator has been praised as an aesthetic model of the male nude in motion. It was endlessly copied, modeled and adapted by both modern and contemporary artists. Nowadays the figure is part of the collection of the Louvre as it was acquired by Napoleon.

The statue shows a nude warrior in a vigorous attitude of combat, the standing figure thrusts forward, the left arm extended upwards with a shield in hand. Head facing left, right arm down and behind, hilt of sword in right hand. The warrior plunges forward, the body straining and stretching, to parry a blow, probably from above, suggesting his competition might be cavalry. The displayed athletic heroism is strengthened by the accented musculature. For a long time, it was erroneously thought that the figure was a gladiator, despite the fact that the Greeks did not hold gladiatorial circus entertainments, before the shield strap on its left arm identified him as a warrior. Our hero defends himself energetically, thrusting his torso forward in a movement that is both defensive and self-protective. Protected behind his shield, he prepares to riposte, his face turned sharply towards his opponent. The boldness of the composition, which anchors the warrior in a three-dimensional space and invites the spectator to view it from all sides, is a constant in Hellenistic art. The exaggerated rendering of the musculature and the violence of the figure's movement is organized along a broad diagonal. The pathos in the treatment of the face accentuates the intensity of the warrior's efforts.

The shield is now missing. 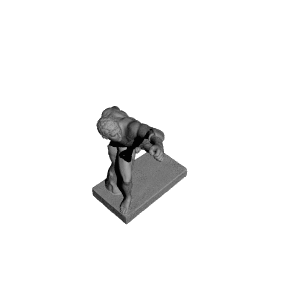