I am exploring the use of 3d printing to make holds for a climbing wall I am building. While it would be possible to directly print holds this is not optimal for several reasons. In order to be strong enough most holds would need to be printed of a high strength material (ABS at minimum, but optimally nylon or PET) and they would need to be printed at 100% infill. But high strength materials are notoriously difficult to print in big blocks and high infills. Even if the print could be accomplished it would be extremely time consuming and very expensive. Climbing walls need a lot of holds so directly printing them one at a time just isn't the best solution.

Climbing hold producers cast their holds from resin, typically polyurethane. It would be possible to print a master from and make a mold from it. However, mold rubber is quite expensive and the mold making process is time consuming, and with a little 3d printed cleverness it can be avoided. It is easier to turn the master into a mold digitally and then print the mold in a flexible material. Ninjaflex would work great because it is very stretchy and flexy which are are good characteristics in a mold. But those characteristics make it difficult to print reliably. It is also proprietary and quite expensive. TPU filament is slightly stiffer which makes it much easier to print. Plus it is available from multiple suppliers thus it is much cheaper.

The socket in the middle of the mold forms the countersink for the mounting bolt. The socket holds a stub of 3/8" round rod which forms the bolt hole. It would be possible to print this part of the mold but in practice it doesn't work well. Since the 3/8" round has a relatively small cross section it tends to tear off on the first cast.

The example shown is based on a model of a human brain made from a medical scan and somewhat simplified to make a usable mold. The photo shows a hold cast in high strength fiber-reinforced industrial grout. This material is very inexpensive and It works great for large holds like this where its lack of tensile strength isn't an issue. Smaller holds and designs where part of the hold must resist tension are better cast in a polyurethane resin such as Alumilite RC-3. RC-3 sets so quickly that you can mix, pour and unmold a cast every 10-15 minutes. For comparison printing this hold at 100% infill would take 48 hours if it could be done at all.

We talked about this and a whole lot more on the 3D Printing Today podcast available on iTunes, or Stitcher radio learn more at http://www.threedprintingtoday.com/ 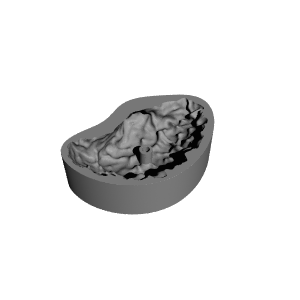