This stone monument shows the Buddha Shakyamuni flanked by two bodhisattvas. The Buddha's right hand makes a gesture of reassurance, and the left hand a wish-granting gesture. The inscription tells us that the sculpture was paid for by five donors, three of them members of the same family.

This limestone carving of the Buddha with two attendant Bodhisattvas is typical in its style of late Wei sculpture. It probably came from north China, from the borders of Shaanxi and Henan provinces. Many Chinese Buddhist images and artefacts were produced during the great period of expansion of the religion in the sixth century AD, and this sculpture is one of the V&A's foremost Buddhist stone carvings. It is inscribed with the date of 544 AD and was paid for by five donors, three of them members of the same family. It probably stood in a public place for passers-by to worship. On the face of the plinth, the long inscription states that the stele was carved as a memorial to one Li Hung-yen. It expresses the donors' faith in the divine light that banishes bodies as if they were dirt. That the great wisdom and understanding of Sakyamuni permeates all things like the scent of orchids. That the stone was 'auspiciously carved' as a palace image so as to compare with that which is beyond compare. That its great beauty springs from the source of inspiration. That the donors offer their praise. It also expresses the wish that through the attainment of divine understanding one should pass into a state of calm and tranquil purity. And, finally, that this sacrifice be as great as those of the past. 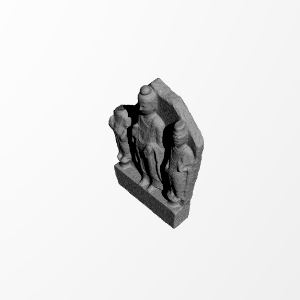