Bust of Nefertiti at the Neues Museum, Berlin

Bust of Nefertiti at the Neues Museum, Berlin

Considered as being The Sun Queen, she sits in her room at the Egyptian Museum, gazing through the rooms of the museum, catching eyes with the statue of the sun-god Helios from Alexandria. The busyt was created around 1340BC by the court sculpture Thutmose, in whose studio in Amarna Nefertiti stood as a sculptor's model. The limestone core was given its final form by several laters of stucco on the crown and shoulders. The individuality of the artist and the personality of the queen unite to bring immediacy to the expression 'beyond space and time'.

This revised model was scanned and processed by artists Nora Al-Badri and Jan Nikolai Nelles for their project "The Other Nefertiti"; their intention is to make cultural objects publicly available to everyone. 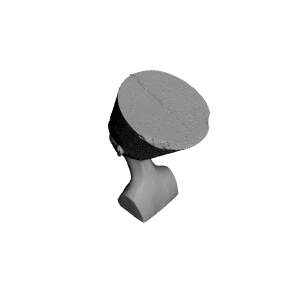 Electroplating experiment on PLA. Conductive graphite spray and then electroplated.

Sliced and cut down to create a wall hanging. Printed on a Craftbot XL with 3Dfillies PLA

Printed in pla marble from Eryone.