The sculpture is Greek, created in the Attic era ca. 530 B.C. and was said to have been from Attica. This capital and sphinx originally crowned the tall grave marker of a youth and a little girl. A plaster copy has been set on the original monument itself.

The sphinx, a mythological creature with a lion's body and a human head, was known in various forms throughout the eastern Meditteranean region from the Bronze Age onward. The Greeks represented it as a winged female and often placed its image on grave monuments as guardian of the dead. This sphinx, which retains abundant traces of red, black and blue pigment, was carved separately from the capital on which is stands. Its plinth was let into a socket at the top of the capital and secured by a metal dowel and a bed of molten lead. The capital is in the form of two double voluites (spiral scrolls) designed like a lyre. The front face of the capital also had a painted design of palmettes and volutes. 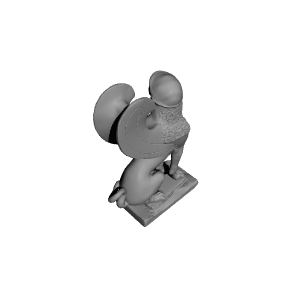