Oak, carved in high relief, in five major parts. Christ facing right, having fallen on both knees, puts out his right arm to prevent his complete prostration. The Cross on his left shoulder is held by his left hand and by the upright figure of Simon of Cyrene behind him. Simon stands with his back to the spectator in a classic contraposto, holding the foot of the Cross with both hands and resting it on the thigh of his right leg. His bearded face is turned upwards to the right in grief. He wears a hat and his riding attire is slashed à la mode. 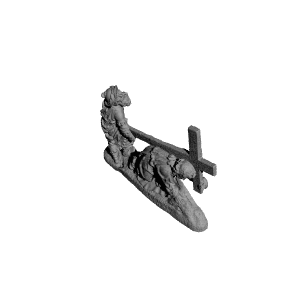 Before painting. I'll add another photo when I've painted it.

After acetone treatment followed by painting. I did a base coat of nutmeg-coloured spray paint, followed by a darker brown acrylic applied with an almost-dry brush to get the wood grain effect. It's darker than the original but the slight gloss of the paint lifts it.