Bust of Eleonora Duse at The Gallery of Modern Art of the Palazzo Pitti in Florence, Italy

Bust of Eleonora Duse at The Gallery of Modern Art of the Palazzo Pitti in Florence, Italy

Minerbi was the favourite artist of Gabriele D'Annunzio, for whom he produced "Luisa", a portrait of D'Annunzio's mother (as well as the tomb in the Chiesa di San Cetteo at Pescara, now Pescara Cathedral) and the bust of Eleonora Duse: both these portrait busts were exhibited at the Vittoriale degli Italiani of Gardone Riviera. In 1937 he was commissioned to produce the first (from the left) of five bronze doors for Milan Cathedral (on the theme ofThe Edict of Constantine), but he was subsequently forced into hiding at Gavazzana by racial persecution and only completed the doors in 1948. 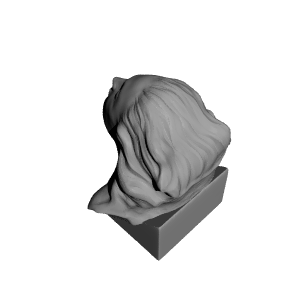 I would like to be a part in MyMiniFactory Wonderland for print job!

Beautiful model of Eleonora Duse. Thank you! (printed at 150 microns)

Print with geeetech marble pla on alfawise u20