‘My first visit to Greece came late in life - it was 1951, when I was fifty-three - and I thought before going that I knew about Greek art, because I'd been brought up on it, and that I might even be disappointed. But not at all, of course. I'd say that four or five of my top ten or twelve visual experiences came in Greece. For example, Mycenae had a tremendous impact. I felt that I understood Greek tragedy and - well, the whole idea of Greece - much, much more completely than ever before... And the Greek landscape was another revelation for me - that stark, stony quality, with the feeling that the sea may be round the next corner. I can understand why they were sculptors - the stone just had to be used, it was the one thing they had to hand’ (quoted in Alan Wilkinson (ed.), Henry Moore: Writings and Conversations, Berkeley, 2002, p. 69).

Henry Moore's famous Falling Warrior was originally conceived a few years after his first visit to Greece in 1951. The idea's origins lay within classical Greek sculpture (see the Dying Warriors, from the temple of Aphaia) and casts of the victims of Pompeii; breaking from his typical statues of woman, he decided to turn to suffering male figure seen in Hellenistic sculpture. Prior to this trip his work sought inspiration from non-Western sources such as African and Oceanic primitive sculpture, being a long-term outspken critic of what he saw as the long-standing pervasive influence of the Classical period on sculpture.

Moore wrote in a letter dated 15th January 1955: ‘The idea for The Warrior came to me at the end of 1952 or very early in 1953. It was evolved from a pebble I found on the seashore in the summer of 1952, and which reminded me of the stump of a leg, amputated at the hip... First I added the body, leg and one arm and it became a wounded warrior, but at first the figure was reclining. A day or two later I added a shield and altered its position into a seated figure and so it changed from an inactive pose into a figure which, though wounded, is still defiant. The figure may be emotionally connected with one's feelings and thoughts about England during the crucial and early part of the last war. The position of the shield and its angle give protection from above’ (quoted in A. Wilkinson (ed.), op. cit., pp. 283-284). 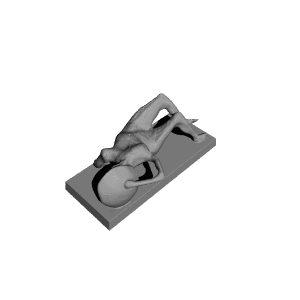