The humped bull Nandi (which means 'rejoicing') appears at the entrance of every temple dedicated to the Hindu god Shiva, facing the god with a constant serene gaze. Symbolising strength, virility and fertility, as well as religious and moral duties, Nandi is widely recognised both as Shiva's gatekeeper and as the animal on which he rides. Seated with his legs tucked underneath his body, this figure portrays a representation of Nandi from the southern Indian tradition (Deccan). 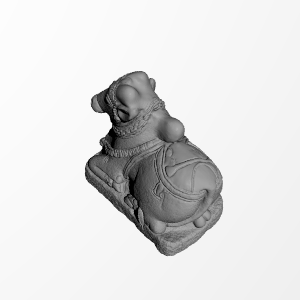