Head of a Roman youth

Head of a Roman youth

This head of a young man is both technically brilliant and touchingly human. In the bravura Antonine sculptural style of the mid-second century, his great mop of curly hair is luxuriantly carved, and his eyes are incised to suggest the sparkle of life. Yet his still young and slightly unformed features suggest innocence.

Portraiture was one of the most distinctive types of Roman art. In early Roman religion, wax death masks or realistic portraits of the dead were left in family tombs as ancestral memorials. Under the impact of idealizing Greek portrait sculpture, Roman portraits of the Empire became rich, subtle, and sophisticated images, blending the psychological realism of Roman art with the sensuous forms of Greek modeling. A superb example of this brilliant portraiture appears in this portrait of a young man, where his soft, dreamy features are almost weighed down by a gorgeous mass of curly hair. The extensive use of the drill and its strong modeling with shadows is typical of this time. The boy's head is close to the type of the young Marcus Aurelius, the future philosopher-emperor, and probably indicates the influence of imperial prototypes on sculpture made for people associated with the Roman court. 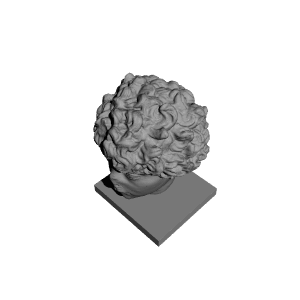