Roman replica after a Greek statue of ca. 440 BC.

Hermes is the son of Zeus and the nymph Maia. He is the messenger and herald of the gods, escort of guests to Olympia, accompanier of heroes on their adventures, and transmitter of the gods’ messages to mortals. Thus, he is also the tutelary god of travellers – as well as robbers and swindlers, since antiquity places them all in the same category. Above all, however, Hermes is the leader of souls. As such, he leads human beings from life to death, a capacity in which he is known in Greek as the “psychopompos”.

This head of Hermes is extraordinarily beautiful. Although a Roman copy, it bears eloquent testimony to the formal imagination and psychological attitude of the classical age. The messenger god is wearing his hat; thus, he himself is characterized as a traveller. His face is framed by small, ornately formed curls. His gaze is lowered, his mouth only slightly open. The god’s expression is masterfully sculpted; it is clearly one of preoccupation and mourning. The body is familiar to us from other copies of the same classical statue. In his left hand, the naked Hermes held his herald’s staff, with which he could put others to sleep, while his right hand was raised to his temple.

Ancient written sources describe a statue of Hermes erected by an Athenian at a state grave. If we identify our Hermes with this statue, then the beautiful face before us is that of a god who, in great pain and great dignity, leads those killed in a devastating military operation to the underworld. 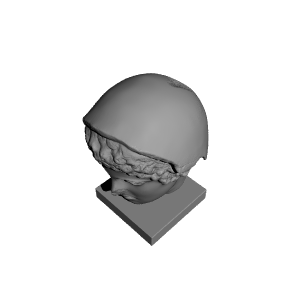