×
See your Inbox
×
×
22 1 Add to Collection
Descripción
In Greek mythology Helen was the daughter of the god Jupiter and was famed for her great beauty. She was married to Menelaus the King of Sparta. Whilst her husband was away, Helen was abducted by the Trojan prince Paris, to whom she was later married. So began a long war between the Greeks and Trojans. A number of other versions of this head are known, one of which is in the Palazzo Albrizzi in Venice. It was seen by the poet Lord Byron in 1812, who wrote:

Another version is in the collection of Lord Londonderry, having been presented to Robert Stewart, Viscount Castlereagh, later 2nd Marquess of Londonderrry, in 1816 (see 'Canova Ideal Heads', ed. K. Eustace (exh. cat.), The Ashmolean Museum, Oxford, 1997, pp. 84-5, cat. no. 4).
This object is part of "Scan The World". Scan the World is a non-profit initiative introduced by MyMiniFactory, through which we are creating a digital archive of fully 3D printable sculptures, artworks and landmarks from across the globe for the public to access for free. Scan the World is an open source, community effort, if you have interesting items around you and would like to contribute, email stw@myminifactory.com to find out how you can help. 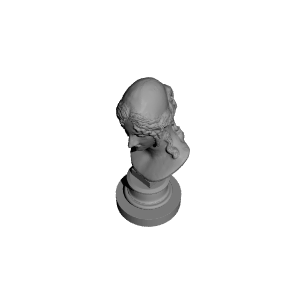