Gale Crater is a large, approximately 152 kilometer-diameter impact crater that lies near the Martian equator. Contained within the crater is a massive central mound of layered material. With an average vertical thickness of almost 4 kilometers, the Gale Crater layered deposits are twice as thick as the layers exposed along the Grand Canyon on Earth.

Shown here is a portion of the mound with an inverted fluvial or river channel. Topographic inversion occurs when sediments are cemented together, forming a harder layer that is resistant to later erosion. This later erosion has preferentially removed material outside the channel, leaving the former riverbed exposed as a ridge—a topographic high. This inverted channel was originally detected by scientists using Mars Orbiter Camera (MOC) images onboard the Mars Global Surveyor spacecraft. 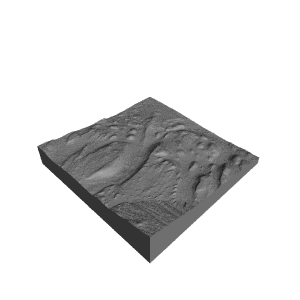