This is the half mask of Kurasame Susya. Its is about 180mm wide and 110mm wide.

"Kurasame Susaya is a guest character from Final Fantasy Type-0. He is the commanding officer of Class Zero. His nickname is the "Ice Reaper" (氷剣の死神, Hyouken no Shinigami?, lit. Reaper of the Ice Blade). He wields a sword and is frequently accompanied by a Tonberry that carries an enormous knife and also wears the Class Zero uniform.

Scalable model printed with standard settings, slightly cutting the base to ensure a flat first layer avoiding supports. Dimensions, time to print and material quantity refer to the object I made. 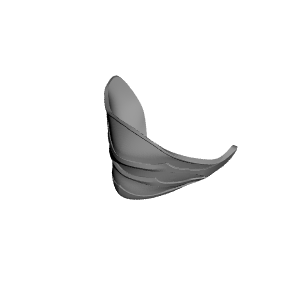