Light's Vengeance was the hammer used by Arthas Menethil during his life as a paladin.

This weapon was an "enormous, heavy- looking hammer, its silver head etched with runes and its sturdy haft wrapped in blue leather." (Arthas : Rise of the Lich King, page 46)

It was given to Arthas by Gavinrad the Dire, one of the first five paladins of the Silver Hand, when Arthas completed a ceremony held in the Cathedral of Light and joined the Knights of the Silver Hand.
When Arthas discovered Frostmourne, he discarded Light's Vengeance, leaving it in the Frostmourne Caverne in Northrend (Players can see a flashback of this scene in the quest Frostmourne Cavern.)
The weapon is later retrieved from its cavern by the Highlord Darion Mograine to forge Shadowmourne.

In order to design this object, I payed attention to the story behind the different models seen around the internet and in various documents. Actually, there's is two models of Light's Vengeance.
• The first one, which was used by several designers willing to model this weapon, is the model as seen in the game World Of Warcraft. I discovered that the model used in game is actually a reuse of Grand Marshal's Battle Hammer, which is an alliance-only lvl 60 PvP weapon. As Light's Vengeance was implemented in game two expansions later than Grand Marshal's Battle Hammer, there is no doubt that no special model was made for Light's Vengeance. It looks like a cartoonish-looking hammer with the Alliance symbol on it.
• The second model type, which is the one I choose to design, is the weapon as seen in Blizzard's artworks and Warcraft III game. I also checked in the book Arthas : Rise of the Lich King (by Christie Golden) how the hammer was described. The description fits a more massive weapon type than the Grand Marshal's Battle Hammer. 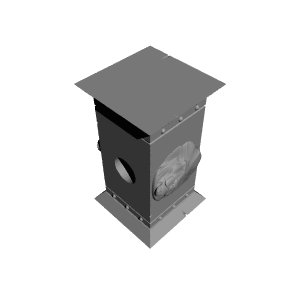