Limestone head of a woman

Limestone head of a woman

A larger than life-size sculptured head. The hair is carved into thick strands secured by a narrow band or diadem, and two curled locks descend onto the cheeks in front of the projecting ears. The intensity of expression is striking, while the exaggerated features and flatness of the face recall Roman theatre masks. The head is a fusion of native British and Roman styles. It was probably a finial from a funerary monument or enclosure alongside Watling Street outside the Roman town of Towcester (Lactodurum).

Description:
The head is set, frontal and neckless, upon a base. The facial features are striking, because of the intensity of feeling conveyed and because of the linear style of raised ridges in which they are rendered. The eyes are set close together under a furrowed brow: they are almond-shaped and protuberant, with the lids defined by ridges and the pupils by a drilled hole. The nose is long and separated by a groove from the mouth, which is small and down-turned. The chin is prominent. The hair is shown as thick strands, drawn to the sides from a central parting and secured by a narrow band or diadem, with central rosette. A stylised kiss-curl (rather incongruously) lies on each cheek. The whole face has a mask-like quality because it is so flat: the ears are depicted frontally, and a profile view shows that the brow, nose and chin all project in the same plane (CSIR I, 8). 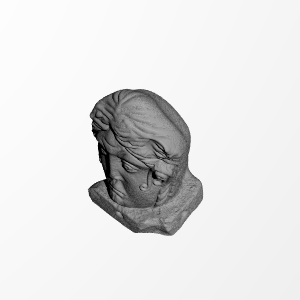