This figure of a youth is one of the best-known examples of the type of sculpture acquired by the Roman upper classes, who sought to decorate their private villas in a way that evoked the sophistication and culture of the recently subdued Hellenistic kingdoms of the eastern Mediterranean. Greek sculptors in Athens and Rome itself could provide more or less exact replicas of well-known statues from the past as well as new creations that imitated or combined various earlier Greek styles. The Stephanos Youth is such a combination: The extremely broad shoulders and the stance bring to mind male statues of the second quarter of the fifth century B.C., while the small head and long legs derive from works created in the mid-fourth century B.C. by the famous Greek sculptor Lysippos. The soft modeling of the flesh is found in the statues of Praxiteles, another famous sculptor of the fourth century, as well as in Hellenistic sculpture of the third and second centuries B.C. A new creation resulted from these learned, eclectic combinations. The statue must have been very popular, for over seventeen ancient copies are known today. It was apparently typical of the sculpture available in the Roman workshop of the Greek sculptor Pasiteles, during the mid-first century B/C. A number of Roman writers commented on Pasiteles, and we have a rare sculptor’s signature by Staphanos, his pupil, on the most complete example of this work, which is now in the Villa Albani, Rome. 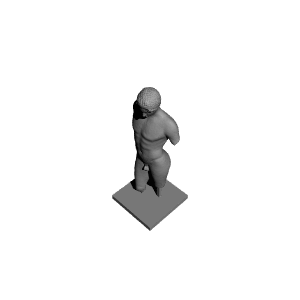