Made possible by my amazing Patreon supporters!

Yoda, a Force-sensitive male being belonging to a mysterious species, was a legendary Jedi Master who witnessed the rise and fall of the Galactic Republic, followed by the rise of the Galactic Empire. Small in stature but revered for his wisdom and power, Yoda trained generations of Jedi, ultimately serving as the Grand Master of the Jedi Order. Having lived through nine centuries of galactic history, he played integral roles in the Clone Wars, the rebirth of the Jedi through Luke Skywalker, and unlocking the path to immortality. 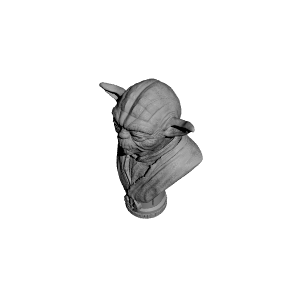 Again a very good model from Fotis Mint. Remixed to do no infill timelapse. https://youtu.be/Ts8By0zgkpU

Printed the Remix of iczfirz, super nice model of Fotis Mint. No supports and no infill. 3 layers, 3.5hr print. 125% high.

Many thanks, looks really good.

This one is another amazing Yoda, probably the best Yoda bust I have printed. Also did a timelapse of the progress of the print - http://youtu.be/HJ2HQ7f79fQ Thanks so much!

Thank you! Printed nicely on my ender.

Thank you very nice model. I am new to this and it's the largest thing i've printed on my Mars Pro so far. Took 13 hours.

Great model, such a detailed. Looks great. I have printed it about 11 hours, but it worth it 100%. Thanks a lot!

A really great model. This print was made on a photon mono with a total hight of 140mm in 8 hours and 34 minutes printing time. For the paint job I used miniature acrylic paints.

Thank you for the beautiful model!