The distinguished Italian Neoclassical sculptor Lorenzo Bartolini began his career producing high quality decorative urns and tazzi for visiting grand tourists. Falletti, Bietoletti and Caputo publish a series of nineteen sketches with designs for such vases (op. cit., pp. 196-199, no. 10). One of these is near identical to a marble tazza executed by Bartolini for the 6th Duke of Devonshire at Chatsworth House in Derbyshire, circa 1820 (op. cit., no. 10, fig. 1).

Whilst Bartolini is known for his marbles with exquisite surfaces, he trained as an alabaster carver with Barthelemy Corneille in Volterra (one of the centres of production of alabaster statuary in Tuscany) in 1795; it is consequently unsurprising to find his signature on the present magnificent vase. The frieze running around the drum of the urn is taken from the monumental pentelic marble Vaso Borghese which was discovered in 1566 on the site of the gardens of Sallust in Rome and acquired by the Borghese family who owned it until it was purchased by Napoleon and installed in the Louvre, where it remains (inv. no. MR 985). The frieze represents a Dionysiac procession, with the wine god thought to be the youth playing the aulos, draped in a panther skin and facing Ariadne, who he rescued on Naxos. It may, however, represent a more generic Bacchanale, the subject having been a matter of some debate. The Vaso Borghese was a celebrated antiquity at the time Bartolini was working, it was depicted by Hubert Robert (circa 1775) and it should be considered that its acquisition by Napoleon would have made it an appropriate subject choice for Bartolini, since the sculptor was commissioned to produce numerous decorative urns for Napoleon’s residence on Elba (Caputo, op. cit., p. 196, no. 10).

The lower half of the vase, is, however, taken from the designs of Giovanni Battista Piranesi (1720-1778), whose so called Piranesi Vase in the British Museum (inv. no. 1868,0512.1; which incorporates antique elements) is supported by a tripod arrangement of legs in the form of Atlas caryatids, identical to the present figures. This mixing of antique and contemporary designs is unsurprising given that Bartolini was creating his own models at that time, and patrons may have specified certain arrangements at the time of commission. 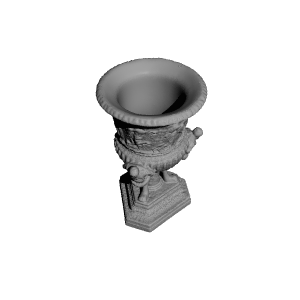