One of the most accomplished examples of carved ivory known from Norman Italy, the so-called "Morgan casket" is also one of the clearest expressions of the international artistic milieu in which it was created. Pairs of men in turbans and tunics stand guard at the corners of the casket, recalling in style and programmatic use similar figures on the ceiling of the Cappella Palatina at Palermo. Medallions on the side panels are filled with fantastic beasts and birds, which are hunted by men with spears. 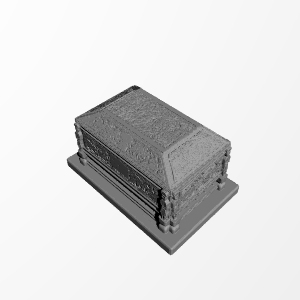