Antonio Canova was born in Possagno in 1757, at the foot of the Treviso Prealps to a family of experienced stonecutters. He received his technical training from his grandfather and the workshops of skilled late Baroque sculptors between Asolo and Venice; it was not long before he met members of the more modern and influential circles of Venice and it was there that he began to develop his fundamental classicist direction and received his first commissions.

This is one of a pair of sculptures depicting the mythological tale of Orpheus and Eurydice. With this sculpture (1775-76) - statues in soft stone that were originally on the pillars of the villa gate belonging to Senator Giovanni Falier in Asolo - the sculptor barely eighteen years old, completed his first evocative large-dimensioned sculpture, revealing he was still under considerable influences from the painting style of the Eighteenth century. This changed immediately with his first sensational masterpiece 'Daedalus and Icarus' (1777-79), which enables him to go to Rome and finish his training.

He made his name once and for all as the most advanced and skilled sculptor in Rome with the creation of the Funerary Monuments to Popes Clement XIV (Basilica dei SS. Apostoli, 1783-87) and Clement XIII (the Venetian Carlo Rezzonico in Saint Peter's, 1783-92). 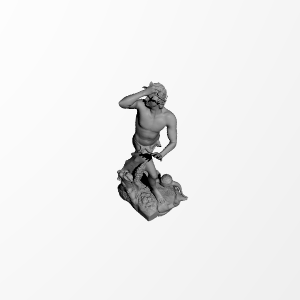