Here is a PacMan ghost!
It's made using 8.8MM cubes for the basic form.

How I design it?:

Well, first I take an "original" image of the ghost itself and use it as a Canvas in Fusion 360 then I made the general outline with normal lines and line multipliers to make sure that I don't make mistakes in the input numbers:

and extrude it using the total amount of squares (Side to side) as a reference of how much I need to extrude it:

Then in the perpendicular plane I attached the canvas again making sure the vertical and horizontal perimeters are align with the model and trace it again with the exact same shape but adding an external rectangle so I can use the shape as a tool to extrude-cut the perimeter of the second side.

Hope you like the model!!! As far as I know it's completely "real" (shapewise) to the original design :D

If you want perfect sides I recommend to print it as is with support (.4mm automatic in Simplify3D in my case).

Bed: 60C (Glass with hairspray)
Extruder: 200C
Speed: 60mm/s (40% underspeed external perimeters)
Solids: 3*3*3
Infil: 3% (Here I need to make a note, in MY case it printed well with a little tiny hole in the left side of the right pupil, but the print is bassically perfect. The 3% infil ALMOST doesn't work because it wasn't enough support for the top layers, but being 3 solids it build up on top of each other to create a success print, be aware you might not be capable of doing this if you don't have your retraction and extruder multipliers well tuned, I recommend 5% or 10% infill to make sure the model will print right :D) 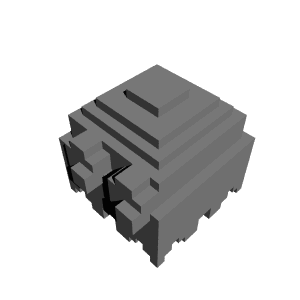