Palermo Cathedral is the cathedral church of the Roman Catholic Archdiocese of Palermo, located in Palermo, Sicily, an island in southern Italy. It is dedicated to the Assumption of the Virgin Mary. As an architectural complex, it is characterized by the presence of different styles, due to a long history of additions, alterations and restorations, the last of which occurred in the 18th century.

Construction started in 1185 by Walter Ophamil, the Anglo-Norman archbishop of Palermo, on the site of an earlier Byzantine basilica. It was then turned into a mosque when the Saracens conquered the city in the 9th century. Later parts were built in Gothic and Renaissance styles. The present neoclassical appearance dates from 1781 to 1801 (from Wikipedia).

MiniWorld 3D is excited to bring this historical model to life as a homage to all the people of Palermo. Please give credit, it's all about spreading culture and education! 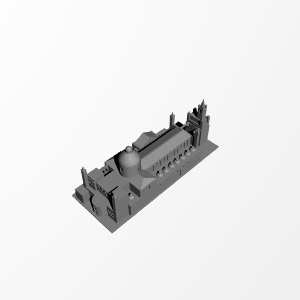