Pan, Greek god of the wild, shepherds and flocks, nature of mountain wilds, rustic music and impromptus, and the companion of nymphs, sits here with his eromenos Daphnis, teaching him to play the pan flute. Depicted here with his usual horns, legs, and hindquarters of a goat (as a faun or satyr), Pan holds his young companion tenderly as he teaches.

Daphnis was, according to tradition, the son of the god Hermes and a nymph. Despite his mystical parentage, Daphnis was mortal. He was a Sicilian shepherd often described as an eromenos, a younger male in his teens in a romantic relationship with an adult male (an erastes). It was said a Naiad loved him, and promised to be faithful to him. However, he was secuded by the daughter of a king and in revenge, the nymph blinded him or turned him into stone. Pan was also said to have fallen in love with the young boy, and taught him to play the pan pipes, as shown in this work.

The sculpture is thought to be a copy of an original, commonly attributed to the Rhodian sculptor Heliodoros. 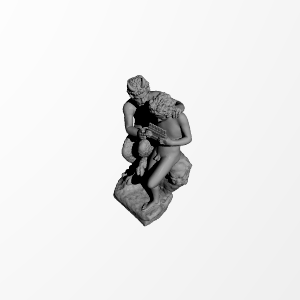