Another great landmark of Palermo, Sicily!

MiniWorld 3D collaborator Manfredi Laguardia from @3dlabaproca shares one more time about his hometown, we are getting to know Palermo pretty well!

Porta Felice is a monumental city gate of Palermo, consisting of two opposing pylons. It is the sea side entrance of the Cassaro, the main and most ancient street of the city. The gate was built in Renaissance and Baroque styles between the 16th and 17th centuries.

It takes its name from Donna Felice Orsini, wife of the Spanish viceroy Marcantonio Colonna, who, in 1582, decided to give a monumental entrance to the Cassaro (the current Via Vittorio Emanuele).
Construction was halted after the death of the viceroy, but resumed decades later and the work continued until 1637. The elapsed time allowed the differentiation of the facades of the pylons: so we have the internal façade with characteristics more tending to Renaissance styles, while the second made with gray marble cladding and sculptures with typically Baroque characters and connotations.
Following the bombings of the Second World War, the right pylon was almost entirely destroyed, but careful restoration has restored the door to its former glory, albeit losing some of the original decorative elements (from Manfredi & Wikipedia).

MiniWorld 3D is excited to bring this historical model to life as a homage to all the people of Sicily. Please give credit, it's all about spreading culture and education!

MiniWorld 3D is a collective of 30+ artists creating the best library of 3D printable models of landmarks of the world! 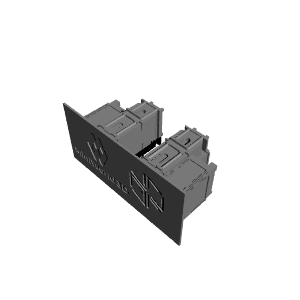 Fantastic model! It came out really great in this mint color. On to the next print :) Thank you!