The Voussoir Ripoll is a sculpture (stone carving) 52.5 x 34.5 x 26 cm from the Benedictine monastery of Santa Maria de Ripoll (Ripollès), which is currently at the National Museum art of Catalonia.

This piece is an example of large-scale production of stone sculpture workshops that worked at the abbey of Santa Maria de Ripoll. Unlike works as Ager, represents a more advanced Romanesque sculpture, which is located on dates beyond 1150. It is difficult to know what was to be the original destination of the sheep as it was found under the floor in the monastery. Cal thought it must have been part of the arc of a door set Ripoll, like other remains are preserved. The workshops that worked Ripoll are characterized by contacts with major centers Languedoc, especially Toulouse, and also some analogies works in northern Italy.

It is decorated with a head, with characteristics between humans and monsters, which carries a helmet and he seems to ram down the throat. Its symbolism, although difficult to specify, shows the downside of the head and gives a sense demonic, emphasized by the pointed ears and the fierce nature as a whole characterizes. In any case, such a reason is very common in the Romanesque and comes in many variations.

Stylistically, its descriptive nature is evident in the willingness to work details, precise, with some geometrical that make the piece stylistically closer to Ripoll's other works, especially large parts of the facade of the church monastery, one of the masterpieces of Romanesque sculpture in Catalonia. 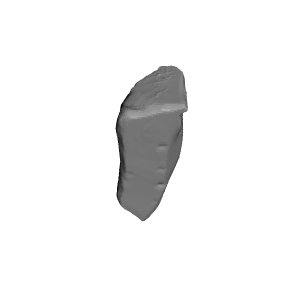