This is a larger than life marble torso of Eros; it originates from Rome, sculpted in the Imperial Period (1st or 2nd Centutry A.D.). It is an adaptation of a Greek bronze statue representing the Apollo Sauroktonos (Lizard Slayer) of ca. 350 B.C. by Praxiteles.

The delicately modeled surface and sinuous curve of this torso are typical of the style of Praxiteles. The original bronze statue showed the young Apollo leaning against a tall tree trunk and holding an arror; he was poised to slay a lizard climbing up a tree. The Romans did not hesitate to alter and adapt the famous Greek works. Here, apollo has been transformed into Erod, as can be seen by the remains of wings on his back. 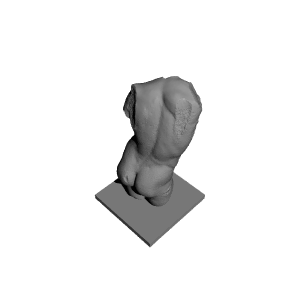