Two Piece Reclining Figure No3. at the UEA, Norwich

Two Piece Reclining Figure No3. at the UEA, Norwich

The two piece reclining figure series was commenced in 1959 although in dialogue with earlier multi-part figures made in the 1930s. The broken composition was used by Moore to emphasize the importance of space as a vital sculptural element. He is quoted as saying of the series: ‘the Two-Piece Reclining Figures must have been working around in the back of my mind for years, really. As long ago as 1934 I had done a number of smaller pieces composed of separate forms, two- and three-piece carvings in ironstone, ebony, alabaster and other materials. They were all more abstract than these. I don’t think it was a conscious or intentional thing for me to break up the figures in this way, but I suppose those earlier works from the thirties had something to do with it. I didn’t do any preliminary drawings for these. I wish now I had... I did the first one in two pieces almost without intending to. But after I’d done it, then the second one became a conscious idea. I realised what an advantage a separated two-piece composition could have in relating figures to landscape. Knees and breasts are mountains. Once these two parts become separated you don’t expect it to be a naturalistic figure; therefore, you can justifiably make it like a landscape or a rock. If it is a single figure, you can guess what it’s going to be like. If it is in two pieces, there’s a bigger surprise, you have more unexpected views; therefore the special advantage over painting - of having the possibility of many different views - is more fully exploited... The front view doesn’t enable one to foresee the back view. As you move round it, the two parts overlap or they open up and there’s space between. Sculpture is like a journey. You have a different view as you return. The three-dimensional world is full of surprises in a way that a two-dimensional world could never be.’ Moore, born and educated in Castleford in Yorkshire, would have been conscious of the striking rock formations the Bridestones, near Scarborough and Brimham Rocks near Harrogate, evoked so powerfully here. 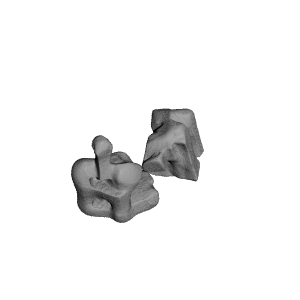