This model was created by MiniWorld 3D founder Dany Sánchez.

The Willis Tower is a 108-story, 1,450-foot (442.1 m) skyscraper in Chicago, Illinois, United States. It was commissioned by Sears, Roebuck & Co. in 1969 for its new headquarters, and built between 1971 and 1974. Up until 2009, it was named Sears Tower, but after Sears sold it and insurance conglomerate Willis Group moved in as tenant, it was renamed as part of the lease. The name could possibly change again in 2024 when the lease expires.

For such an old building, it is still the third-tallest building in the United States and the Western hemisphere – and the 23rd-tallest in the world.

Engineer Fazlur Rahman Khan is credited for the innovative and cost-effective approach of 9 square tubes arranged in a 3x3 grid, with different heights (from Wikipedia).

MiniWorld 3D is excited to bring this model to life as a homage to all the people of Chicago. This model was designed from scratch, no scans or repurposed models, so it's pristine clean for 3D printing! Please give credit, it's all about spreading culture and education!

Easy print, no supports, brims or rafts needed. Slow speeds are recommended for the spires. Adaptive layers could also help. 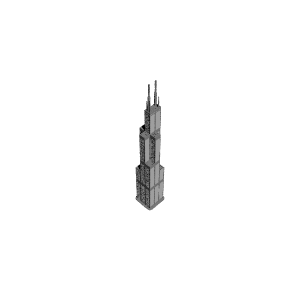 Such a cool skyscraper! I made this one using Champagne Gold PLA. 3D Printed at 0.2mm layer height and it took about 5 hours to complete. :)