I liked the look of the 30mm swept rail on Thingiverse by DNeves, so I extended it to fit on my KWA Vector. I slightly enlarged the picatinny slot as it was a quite a tight fit and I also enlarged the top rail portion a few percent as it was a bit too small. The rear portion (30mm) of the Vector's rail was left open to allow the sling mount to move freely and not get obstructed by the rail.

This version has countersinks for square M3 nuts (I had a bunch left over from a kit), but I will upload a version for hex nuts soon. M3 machine screw length is 27mm, I just used a few longer ones and cut them down.

I will upload new photos soon as well, the ones shown are of a previous version but it doesn't differ much. I also just noticed there's a small flaw in the model in the rear part above the screw hole, but it's small and doesn't affect the function. Feel free to repair if you feel like doing so. Thanks! 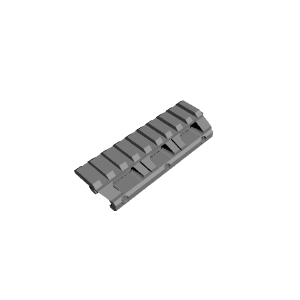